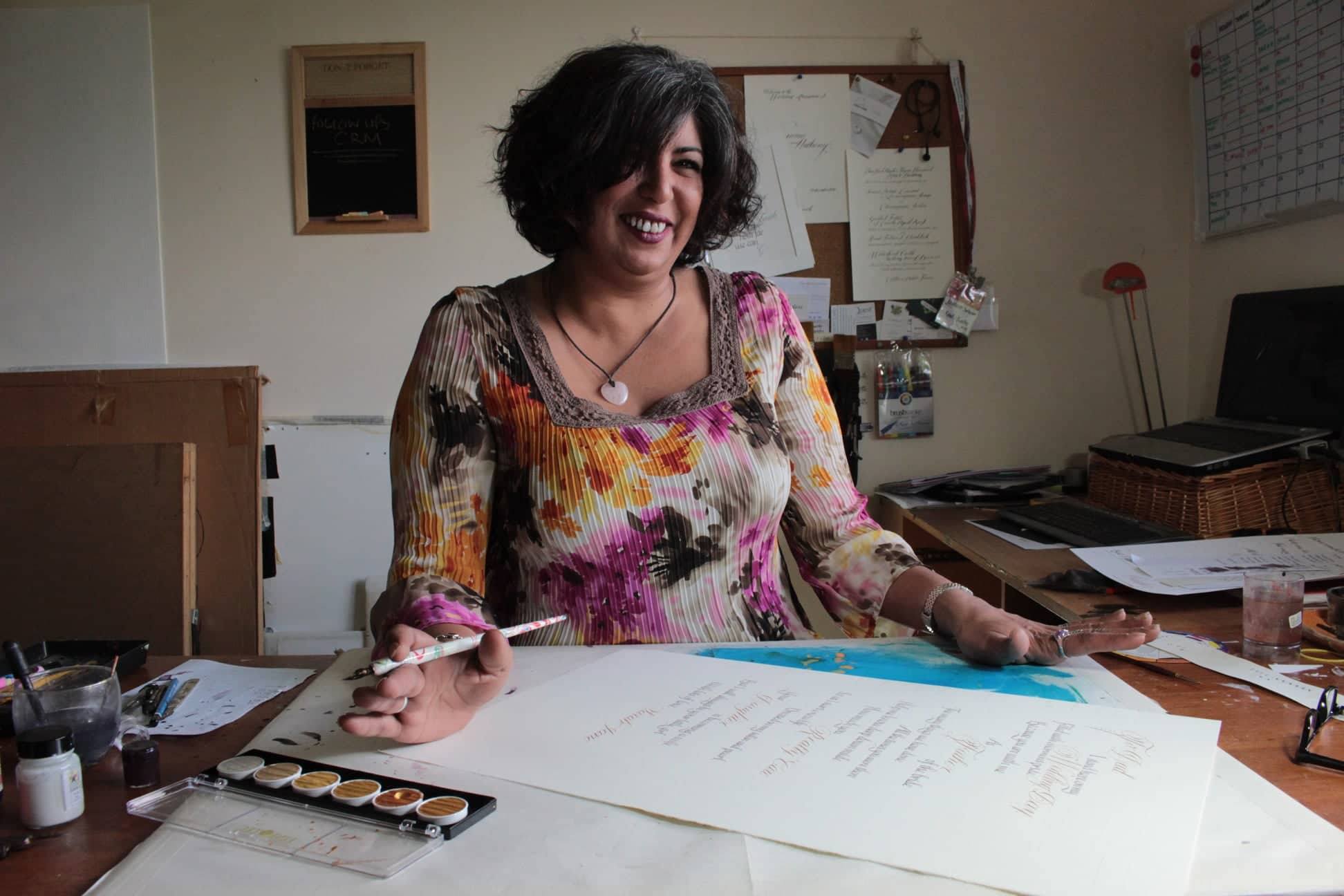 WebsiteFacebook
Twitter
LinkedInEmail
Share this:
Jagdeep Sahans
The Story
The story behind my business name, is my journey of healing. I was in an unhealthy relationship that left me feeling little more than nothing and no body. I was isolated and struggling to keep my failing business alive. It was during this time of upheaval that I met the wonderful Vincent Byrne, business coach (whom I like to refer to as my life coach). We started to work together to rescue me and my business. It was during our 2nd session when he came to see where I worked from that he noticed my artwork. He became curious to know who the artist was. To his surprise he learnt it was me. It was almost from that moment on - we truly began to work through the blocks. As part of the process of healing both myself and defining my business Vincent helped me recover my love of Calligraphy. It was something that I thought had left me but I kept deep inside of me. He helped me bring it to the surface and reignited my desire for the craft. This art and craft form had always been a part of my life, it was an extension of my being, my soul.
Best advice given
Keep believing.
Business day
To give thanks and gratitude before getting out of bed.
Mind yourself...
I meditate and use EFT to work through blocks.
To align myself with my truth.
Best advice outside business
Proudest moment
When I was asked to inscribe a letter to the Irish Ambassador to USA
Funniest moment
I can't really make any mistakes with Calligraphy. But, the funniest piece I ever did was designing Christmas Cards for Jacinta.
Believe in yourself. Don't let others rule you.
A younger you?

Inspiration
Richard Branson, Joe Vitali, Samantha Kelly, Brad Yates, Satish Kumar, Indra Ghandi and my Dad (he was a Sikh Community Leader for 25 years in the UK)
anthem for business

Has to be "Three Little Birds" Bob Marley - cause everything is going to be alright.

"why" For business
I always wanted to work for myself. And, when the best boss in the world (Nigel Turner) said that their was nothing stopping me but me. I went for it.
other jobs
Started off as an accounts clerk - accounts to trail balance and worked part-time in retail Sales. Then, moved to work for a large transport company and worked in Indoor Sales promoted to Outdoor Sales. Then, back to admin and accounts. Then back to Sales this time Technical Sales with Marketing in construction. And, finally back to admin and book-keeping. (that's a brief synopsis)
mission
My mission is to help express the message of love in each one of the pieces I inscribe.
My USP is that I'm a generational calligrapher. I was taught my craft by my Dad.
Unique selling point
causes or projects
passionate about
Yes, I'm extremely passionate about the environment and water. One of my goals to help with the re-forestation programmes.
get into your industry

Each calligrapher has a unique style. Learn the technique and your personal twist. Practice. And, don't be afraid to put yourself out there.

People can find you

You can find me everywhere:

I was the youngest team member and first person of Indian descendent to be a part of the England Karate Squad (because I was so young, I was in team b, second reserve)

Here's a funny story for you: during an international match against Ireland. I was transferred to the Irish Squad to fight against my own team (I won my bout which meant that Ireland Won the Championship)